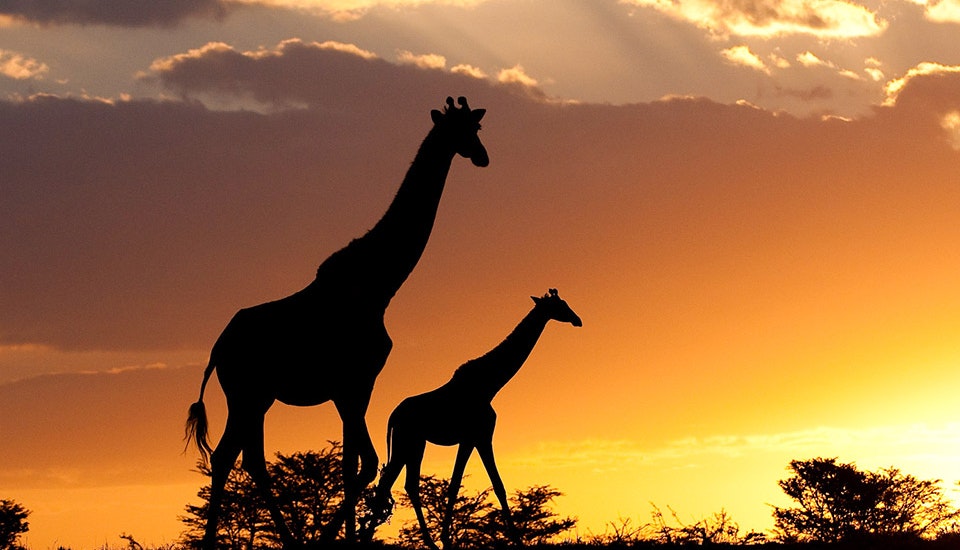 Kenya represents the classic image of Africa. Expansive savannahs dotted with Acacia trees, all with the stunning snow-capped Mt. Kilamnjaro in the backdrop. Home to numerous conservation communities, expert trackers guide you through pristine preserves to get you as close as possible to Eastern Africa’s wildlife including rhinos, elephants, and other endangered species. Your itinerary consists of daily safaris, bush walks, horseback expeditions, a visit to a traditional Masai village, and of course lush accommodations and delectable meals. Continue on to Zanzibar, Tanzania, home to the continent’s best coral reefs and a dreamy private Mnemba Iisland retreat in which to soak in the magnificent water views. Eastern Africa is home to one of the Earth’s last true wildernesses and it’s yours to explore.

Welcome to Kenya! Upon arrival at Jomo Kenyatta International Airport, you will be greeted and chauffeured to Hemingways Nairobi, where you will spend 1 night.

Kenya’s capital is one of the largest and most influential cities in Africa. Named after a Masai watering hole, “enkare nyarobi” means “place of cool waters.” Nairobi is known for its leafy streets and parks.

About Hemingways Nairobi Hotel
This 45-room boutique hotel has elevated the standard of luxury service for travelers in Kenya. Beautiful in its symmetry and flooded with natural light, this plantation-style property is airy and spacious. Its 80- square meter bedrooms each have a private balcony overlooking the iconic silhouette of the Ngong Hills. Accommodations are in a Deluxe Room with ensuite facilities and includes breakfast, butler valet services, wifi, satellite television, local newspaper, gym, and unlimited supply of mineral water in the room.

After breakfast you will be driven to Wilson Airport for your scheduled SafariLink flight. On arrival at the airstrip you will be met and transferred to ol Donyo Lodge, where you will enjoy 3 nights.

The striking and diverse landscapes of the Chyulu Hills National Park are tucked away between the renowned Tsavo West and Amboseli National Parks. The park includes a collection of ancient volcanic cinder cones and craters, with the most recent volcanic peak forming just 500 years ago. It is also home to the longest lava tube in the world. Visitors will delight in the breathtaking vistas of Mt. Kilimanjaro and the wonderful selection of game, which includes buffalo, antelope, elephant, leopard, wildebeest and zebra. The birdwatchers’ paradise of Lake Jipe lies in the southwest corner of the park.

Imagine 275,000 acres of scenic Africa, where the wildlife can be found free and roaming, without tourists in mini buses or a fixed schedule to adhere to. Imagine travelling without limitation across the archetypal savannah of East Africa in an open 4×4 game drive vehicle, or feeling the rhythm of Africa beneath your feet as you walk with expert trackers, or exploring on horseback, all with Mt. Kilimanjaro as a backdrop. You’ve imagined ol Donyo Lodge. Suites have a lounge, veranda, indoor and outdoor showers, double washbasins, flush toilet and bath, and “star-bed.” The rooftop “star-bed” is accessed from the veranda via a winding stone staircase. This is a fabulous sleep-out option, with utter privacy and all the amenities of the suite just below. Accommodation is in a Pool and Family Suite with ensuite facilities, and includes all meals and non-premium beverages, scheduled safari activities (including horseback riding), laundry and airstrip transfers.

After an early breakfast, you will be transferred to the airstrip for your scheduled SafariLink flight to Lewa Airstrip (via Wilson Airport). Upon arrival at the airstrip you will be greeted and enjoy a short game drive to the lodge, where you’ll enjoy the next 3 nights.

Once a cattle ranch and then a sanctuary for endangered black rhino, the Lewa Wildlife Conservancy is now a 65,000 acre privately owned wilderness area. Situated in northern Kenya, the Conservancy is home to Africa’s Big Five and supports more 440 bird species and more than 70 different mammals. Here, guests can also witness rare game such as the Grevy’s zebra, reticulated giraffe and sitatunga. The semi-desert environment boasts beautiful views of the snow-capped peaks of Mt. Kenya to the south and to the north, views of Samburu and Ololokwe.

After breakfast you will be transferred back to Loisaba Airstrip for your scheduled SafariLink flight to Masai Mara Airstrip. On arrival you will be met by a representative from Mara Plains Camp and embark on a game drive transfer to the Camp, where you will enjoy 3 nights.

The Masai Mara is Kenya’s most renowned game park and forms the northern extension of the Serengeti. Its legendary Great Migration, of over 2 million wildebeest and other antelope, has been described as one of nature’s greatest wildlife spectacles – and an experience every safari enthusiast should witness at least once in their lifetime. Game viewing in this celebrated park is wonderful year round, with virtually guaranteed sightings of the Big 5. The park takes its name from the Mara River, which flows through the reserve, and the Masai people, a tribe whose red dress and proud demeanor have ensured they are probably Kenya’s best-known (and most-photographed) people.

Mara Plains Camp is located on the northern border of the Masai Mara Game Reserve in the 35,000-acre Olare Motorogi Conservancy. Rarely a night passes without a lion roaring nearby, while leopard are regularly found to wander through the camp and cheetah have established territories on the savannah nearby the main area. Mara Plains Camp is a small, high quality, seven-roomed camp under canvas and on raised decks with sweeping views across Kenya’s notable savannahs. It is among the smallest and most personal camps in the Masai Mara region. Accommodations are in a Tent with ensuite facilities and include all meals, alcoholic and non-alcoholic beverages (excluding imported and premium drinks), scheduled activities in the Masai Mara Reserve, Olare Motorogi and Mara North Conservancy including one day pass to the Masai Mara Reserve, airstrip transfers and laundry.

After breakfast, you will be transferred back to Masai Mara Airstrip for your scheduled SafariLink flight to Wilson Airport; you will be collected at Wilson Airport and transferred by road to Jomo Kenyatta International Airport for your outbound flight to Zanzibar Airport. You will be met at Zanzibar Airport and driven to the Mnemba crossing point (approximately 1 hour) to meet your onward boat transfer to Mnemba Island (approximately 25 minutes), where you will enjoy 3 nights.

Off the northeastern tip of Zanzibar lies the private Mnemba Island – an island inhabited only by guests and the staff taking care of them. Just 1.5km in circumference, Mnemba is surrounded by an atoll of breathtaking coral reefs, and boasts some of Africa’s most magnificent dive sites. The calm, azure seas surrounding Mnemba offer irresistible snorkeling, scuba diving, kayaking, fly fishing, windsurfing and permanent swimming directly from the beach. Turtle season occurs between April and August (however layings can occur year round), and these prehistoric creatures can be seen laying their eggs on the beaches. Within 9 weeks, the beaches are filled with tiny turtle hatchlings. Accommodation is in a Banda with ensuite facilities, includes meals, soft drinks, house wines, local beer, local brand spirits, snorkeling, kayaking, salt water fly fishing, windsurfing and scuba diving (guests must provide proof that they hold a valid diving certificate, alternatively diving courses are available at an additional cost).

After breakfast depart by boat to the crossing point, where you will be transferred to Zanzibar International Airport for your ongoing flights.

Let us help plan your next vacation.

Tell us what you need and our travel experts will send you vacation options within 24 hours.